Huron Valley Council for the Arts (HVCA) was founded in 1999 by a group of local community leaders interested in the arts.  From the outset, HVCA has been dedicated to the belief that community life is enriched and enhanced by the arts in its many forms.  In an effort to define a reasonable scope for its constituency, the HVCA founders decided to align its organization with the Huron Valley School district, which encompassed the townships of Commerce, Highland, Milford and White Lake, as well as the Village of Milford.

HVCA’s early years were characterized by informally meeting wherever a meeting space could be found.  Then in 2002 a fortuitous event occurred when the Highland Township Library completed its new library building.  The structure it previously occupied became available, and HVCA among others submitted a proposal for that building’s use.  In the end Highland Township retained ownership of the former library building, and the township agreed to lease 49% of the space to HVCA.

The building HVCA moved into, and which it still occupies, is a historically significant part of Highland’s heritage.  Located at 205 W. Livingston Road, the structure was built in 1886 as the Highland Methodist Episcopal Church.

In 1980 the structure was acquired by Highland Township and the entire building was renovated for use as the public library.  Throughout its history the structure has been maintained in good repair, albeit with two additions over the years.  In 1981 the structure earned a place in both the Michigan and National Registers of Historic Places.  The building was given the name Highland Station House. 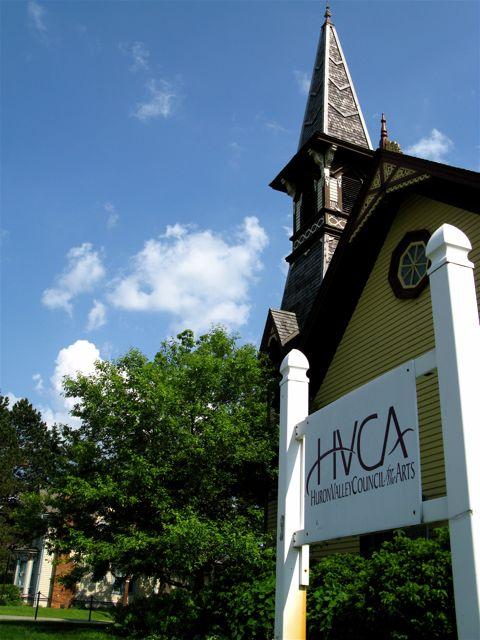 HVCA’s space in Highland Station House includes the original church portion, located at the front of the building.  This section, dubbed Steeple Hall, serves as our exhibition gallery and also our performance space.  Directly back of that section is the area occupied by The Art Shop, HVCA’s artist cooperative, where participating artists may display any of their works which are for sale.

Highland Station House has become established as HVCA’s arts center, and is the venue for many of our performances, events and activities.  In 2017 a Pure Michigan destination sign was installed on nearby M-59, directing travelers to our center. In 2018 Highland Township invested money for renovations to the Highland Station House interior, and we now welcome our visitors with new carpeting, fresh paint and improved lighting.

Highland Station House also serves as venue for other community activities, such as outdoor concerts sponsored by Highland Township